January in Michigan is the start of the coyote “Rut”. Yotes, yoodle dogs, coyotes, coyotl (aztec name) or canis latrans, whatever you call them, you can bet that if they’re in your area, you CAN call them, though it’s not always necessary. I’m fortunate enough to live far enough from town that I have deer, turkeys, fox and coyotes in the woods behind my house. Even though I’m technically in suburban Detroit, I’m in the country and surrounded by woods and all of these critters, and many more, can be seen on an almost daily basis. I’m close enough to other homes that every year at about this time, I notice a lot “missing dog and cat” signs nailed to trees along my dirt road. Coyotes account for many “pet nappings” in my area. Because I try to manage the other game on my land, and on the other local spots that I have permission to hunt, It’s imperative that I manage the coyotes. I hear large packs of coyotes howling within 200 yards of my house 2 or 3 times a week. I’ve witnessed them take down a healthy adult doe and I’ve had them run deer out from under me while in a tree stand. Try as I might I have not been able to reduce their numbers in my area. Luckily I really like coyote hunting, and the beautiful pelts they provide.

I spend a lot of time in tree stands bow hunting deer and I’ve been pretty fortunate to take a lot of shots at coyotes with a bow. 2 or 3 three a year fall to my bow. 2 or 3…or 4 usually escape my bow too. Coyotes are very hard to hit with an arrow. They react to the shot much faster than deer and they’re mostly fur, with a skinny little body hidden inside. I’ve collected a lot of broadhead trimmed fur with nothing else to show for it in my day. Just when you think you’ve got them figured out for a bow shot, they do something new. After having a few “duck” an arrow with blinding speed, I learned to shoot under them so they “duck” into the arrow, just like I do with a tense deer, but then they’ll come up with another move. The “turn yourself inside out” move is the most impressive to witness, and humbling when your perfectly aimed arrow arrives 6 ft behind an unscathed coyote.

With breeding season in full swing, lots of snow and cold weather, the conditions couldn’t be better for targeting coyotes. It’s this time of year that I really get excited to go after yotes. Their fur is prime and calling is very effective. Most of the year, prey species distress calling is my go to, but now is the time to play to the weakness of lovesick canines. I tread lightly but I sometimes start with a series of female vocalizations, and mix in some curious “young of the year” yelps and finish with a short series of dominant male challenge calls. Like a rutting buck to rattling, dog coyotes will sometimes come looking for a fight if they think another male is messing with “their” ladies. In general, a local pack will come out to defend their turf when strange calls are heard.

It’s pretty hard to beat an electronic call and a motion decoy. They work like magic especially where long sight lines are available. In tight wood lots sometimes a mouse squeaker, and nothing else is best though. Scent is pretty important too. All savvy coyote hunters try to set up with the wind in their favor…and all experienced, savvy coyote hunters have been busted by dogs circling downwind. Hunting prairies out west is easier to get the wind to work in your favor. Midwestern woodlots are a whole different matter. Coyotes can come from anywhere and seem to be far more cautious coming to the call than they are in prairie settings. They usually try to get downwind before exposing themselves. For this reason, a trick that I often use is to spread out some attractant scent. I use the same disgusting smelling scent sold in little jars that I use for setting trap lines. It seems to do the trick. I also wear my carbon Scent-Lock bow hunting camo as extra precaution. I’ve watched dogs circle downwind, raise their heads when they hit the attractant scent trail, and then come in as if on a string. I’m sure there are other hunters who call coyotes that use this trick…but I’ve never met one.

I usually arm up with a .223 in case a long shot presents itself, but in some areas where I hunt there are no shots over 75 yards, I’ll use a 22 mag. I crushed two coyotes in the week after Christmas this year, with the 22 mag. Inside of 75 yards, and with good shot placement it’ll do the trick. Coyotes are amazingly tough though, and fast learners. The last thing you want to do is educate them. They become exceedingly hard to hunt if you do. Pick your shots well and use enough gun for the situation. The old standby 12 ga shotgun with No.1 or BB shot works great too, though I prefer the sniper…or bowyer option.

My 5 year old daughter loves to curl up with beautiful coyotes pelts to watch cartoons. and she has requested a full blanket, a hat, mittens and coat for one of her stuffed animals (?), made of coyote, so I have more work to do. Our Michigan season runs year round now but I quit hunting and trapping them as soon as the weather warms, and before the fur degrades, so to lessen the impact on spring fawns and turkey poults, I try to make hay on coyotes while the conditions are perfect. The brutal cold we’ve had so far in January has been hard on the deer and turkeys…and on me. The coyotes seem to love it and I’m seeing them hunt during daylight a lot in this weather. I appreciate that and plan to accept the invitation to play during the day whenever I get the chance in the months to come. It’s a great excuse to get outside…and blanket orders are stacking up. Go shoot a coyote…. a deer will thank you, and if you’re like me and live close to the “burbs” the owner of a small pet may thank you too. 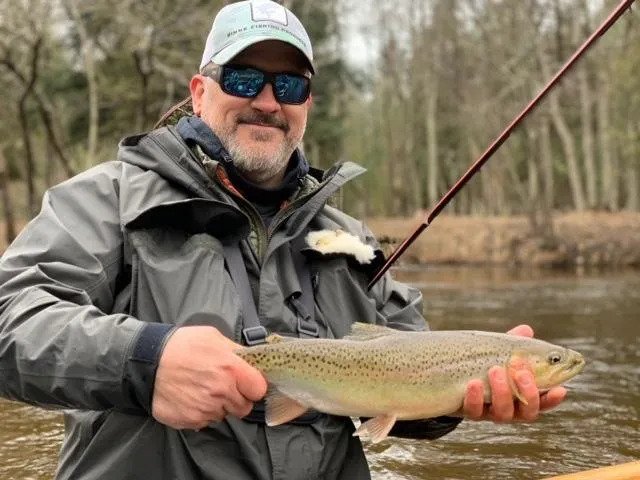